Hi all, Greg Reimer here. Two years ago my partner Brooke and I set out on an epic adventure to sword fight across Western Canada. It went so well we repeated the loop in spring of this year, and again this fall, this time adding a few more days for travel and rest. From Valemount (a small town in eastern British Columbia, where we live) we traveled 13 days, visiting Edmonton, Saskatoon, Winnipeg, Regina, Calgary, Vancouver and Kamloops, then back home to Valemount. I’d love to share a few highlights from the trip. 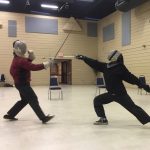 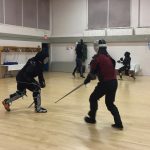 We met with the local Edmonton SCA group, and members of the Edmonton Academie Duello study group (thanks Reme and Sam), to practice single rapier, rapier & dagger, rapier & buckler, and even a little bit of longsword. What a fun group! Plenty of laughs to be had. The next day we met with the Academie of European Swordsmanship (thanks Johanus and Michael), a school with an interesting blend of German scholarship and tournament-oriented longsword. It’s a lot different than what I trained with, and I always come away with a few new insights.
I’m always nervous when meeting new people. What will they think of me and my fencing? I don’t profess to be a master of the arts, but I do sometimes feel a lot of expectation to show a high level of accomplishment. Most of that comes from me, and can easily throw me off my game if I let it. I’m not bold around strangers, and I’m often praying that someone will come and ask me to fence, so I don’t have to approach them first! 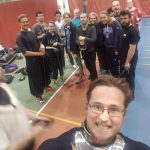 Saskatoon was a great event (thanks Scott). Over a dozen people from several groups (rapier, longsword and more) came together to learn, discuss and discover. I was honoured to be able to share some of our approach to swordfighting–a duel in earnest with sharp swords. It’s different than a more sportified swordfight, or one with a highly restrictive ruleset. The boundaries between different approaches to HEMA can be hard to cross, and that interests me. More on the Saskatchewan crew later. 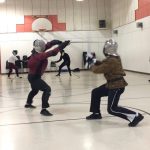 Winnipeg was amazing (thanks Chad). HEMA is strong there, with Chad’s rapier group, Jay’s group who does a lot of broadsword, and a German longsword group. And all three groups represented at our meeting. It couldn’t have gone long enough, 11:00 pm and we left the venue with still many more bouts left to fight! But I’ll have to wait until next time. With several schools represented, there was a fantastic feeling of camaraderie and friendship in that room. Special. 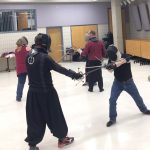 I was looking forward to Regina (thanks Wilfred, Christine and Jenifer). Several people had actually driven from Regina to take part in the Saskatoon event, and had asked me to come into the city early so they could get in some more rapier teaching and practice before taking their kids out for Halloween fun. The fencers there were still in early stages of bonding and team building, with bits and bobs of fencing knowledge to share amongst themselves. Like the folks in Saskatoon, they were extremely eager to learn and had a voracious hunger for solid and effective techniques. I was happy to share with them what I could in the short time we had together, and was left wondering what more I could do for these two cities. 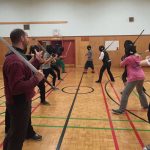 The group we met in Calgary surprised me (thanks Nick and John who are the facilitators of the Academie Duello study group there). About a dozen high school kids who had attention spans ten miles long! One of my presentations is to communicate the essentials of swordfighting using no technical language, only words that everyone already knows and understands. This was a fun way to interact with them, because Nick and John had already done such a good job of teaching them the vocabulary of swordfighting. I used ordinary language, and allowed the kids to make connections to the terms and techniques they already knew. It was a magical evening. 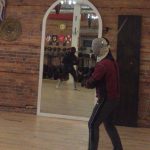 After a snowy day off at a beautiful Princeton ranch, we traveled to Vancouver for familiar grounds: Academie Duello (thanks Devon). It is here that I meet people who play the game the way I learned to play it. And they play it so well! Wow, is it great to really be pushed hard and have to dig deep, not only to outwork your partner but to outthink them, too! Duello is a reminder of how much I love the art, and how much learning I can look forward to for the rest of my fencing life. 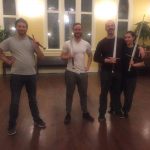 Monday we met with Sword Scholars (thanks Todd) in Kamloops. They’re a Duello study group who is just getting started, and, like me last year, have lots of questions on just how to go about this thing called historical swordfighting, as a group. We travel through Kamloops often, so I’m keen to drop in whenever I can. Having more fencing partners to play with is always a good thing.
And that, in brief, is just a tiny sampling of all the swordfighting that happened in Western Canada in just the last two weeks! The art we practice is loved by a lot of people. Brooke and I were welcomed into their communities and many times into their homes as well. I encourage everyone who reads this to expand their mind this week just a little bit: whatever weapon, whatever language, whatever era, whatever outcome, we belong to each other. We are a family who holds, preserves, revives and passes on precious secrets that make rich our lives and the lives of those we touch.
Greg
#gorgetbetterthantindle #awesomeblindhowlingcat #perogyplanet #pilsnerontap #shakespearstarwars #youngjames #stacyiskillingit #forestercantbebeat #monopolygame #sgtblades #classic80salbums

Istanbul is a city steeped in both European and Asian history. Every site you visit reveals layer upon layer of history that goes back at least 2000 years. This makes Istanbul both an interesting and fitting place for the study of Western martial arts. 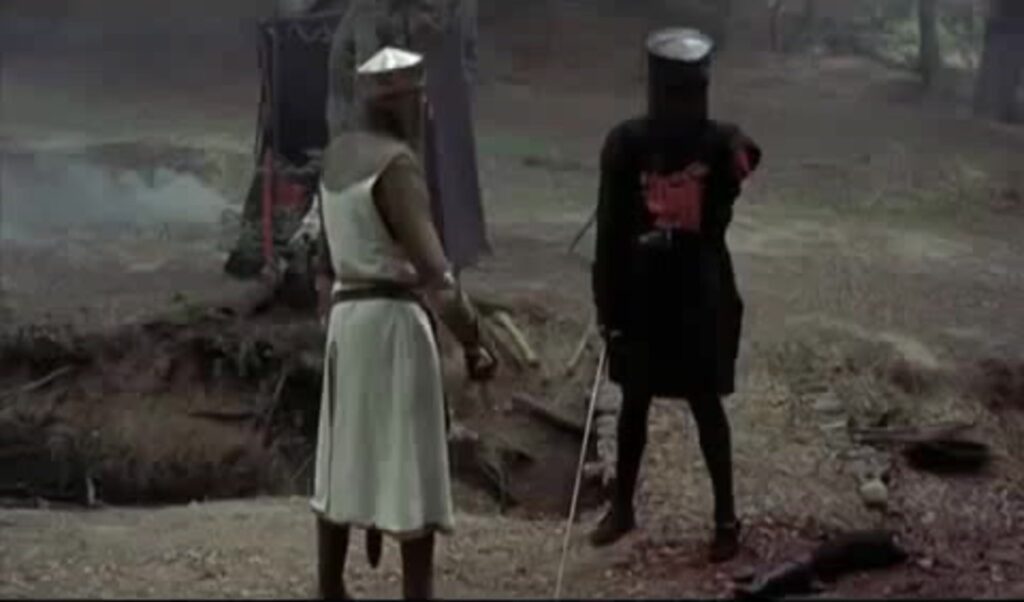 Starting today (January 2nd) and for the next 30 days, we are challenging every sword fighter (new or experienced) to commit to at least 30 minutes per day of practice (solo or partnered). DTV is here to help with loads of training advice and practice videos!